Since no-bake sand foundry Southern Cast Products (SCP) started simulating all casting parts, their efficiency has improved greatly.
– There is not a new part that goes through our shop without being simulated to help identify potential problems and what we plan for eliminating said problems, says Mold Design Engineer Zach Henderson.

Based in Arkansas, USA, SCP is a no-bake sand foundry using industrial robots to carve molds from sand blanks (robot molding) for rapid turn around and one-off castings. They also do traditional pattern no-bake sand castings as well as gravity diecast aluminum castings.

On production challenges and reason for starting simulating, Zach Henderson explains:
– With the high cost of using robot molds, we need to make the part without voids and other defects the first time to control cost […] With the high cost of failure in our shop in having wasted time and higher than average expenses if a casting is scrapped from predictable defects. I do not think we could operate as efficiently as we do without NovaCast.

When SCP was designing a large WCB casing part (Weldable Cast B-Grade Carbon Steel), they knew that they had to be extremely careful and watch the pour weight closely in order to not max out their melt capacity. They were aware of several internal sections in the casting design that could cause severe issues and cost them thousands of dollars.

They made an initial simulation of the part to predict the exact trouble areas.

After more than 15 simulations, Henderson and his colleagues were able to finalize the design with only one small patch of shrinkage, but without any filling defects. They started to assemble and cut molds using their in-house robot molding stations, 3D sand printer and several molding carousel stations. 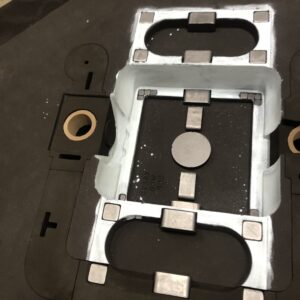 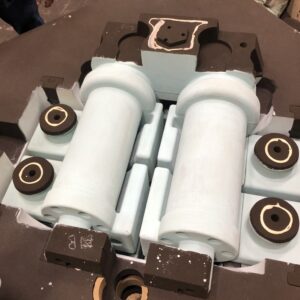 After about a month from receiving the final part model, the finished casting was shipped.

As for further improving their foundry process and smoothen the daily work with optimizing their castings, Henderson is grateful for the local contact within NovaCast.
– Our relationship (to NovaCast) has been excellent. We have had the same representative for several years. This has led to him having a better knowledge to how we do things and is quick to bring up features that we can better utilize in our prosses.