Chilling Fact: You Can Save Money by Thermal Analysis

One very important effect of changing characteristics within the molten iron during induction furnace melting, revealed by thermal analysis, is the chill tendency. This means the cast iron is likely to form iron carbides during solidification, instead of graphite, as the stable form for carbon in ferrous alloys. Traditionally, chill tendency is evaluated according to the ASTM A367 standard. 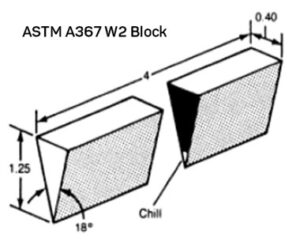 Riposan et al. reported that for inoculated cast irons, carbides formation incidence can be expressed by the relative total chill parameter (RTC). Speaking of that, it was stated that decrease of the solidification cooling rate by increasing the cooling modulus will lead to decrease of the carbide formation incidence. Moreover, in Figure 2. is illustrated how important inoculation process and a proper inoculant can be in order to control chill tendency. Finally, it was concluded that lower under-cooling at the beginning of the eutectic reaction is obtained with inoculated samples, inoculation leads to lower values of eutectic recalescence which directly means the higher low eutectic temperature (TElow) and significantly lower possibility of chill formation, [4].

Our good friends at Torrance Casting (USA) performed tests by pouring molten iron into the cold box cores with wedge-shaped cavities. The samples are then broken to reveal the fracture surfaces and measured for the chill depths. The chill depth is used as an indicator for the chilling tendency. However, the test requires time for sample to cool down to dull red before quenching; therefore, the test is usually conducted along with the pouring of the castings. However, the thermal analysis is the faster test which can be used as a preventive or proactive measure.

The advantage of thermal analysis is to have high quality information on the foundry floor within minutes of sampling and reducing the turnaround time of the laboratory to just a few minutes. While other methods, such as the wedge test and spectrographic chemical analysis, deliver useful information, cooling curve analysis (CCA) can provide a more complete insight into the dynamic changes occurring upon melting and treatment of the molten casting alloys.

A too low value is often obtained if the oxygen content or the number of nucleation sites is too low. It is important to achieve a charge composition where TElow remains at a high level at least 30 minutes after the melt is ready.

According to our satisfied customer, which actually proved this statement, a high value of TElow is normally better, higher than 1145 °C. It reflects the nucleation status of the melt. Low values increase chill and macro-shrink. 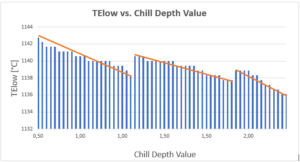 The diagram in figures 3 and 4 indicate the correlation between the lower eutectic temperature and chill depth value. As it can be seen, with decreasing the TElow, the chill depth value is increasing which directly increase the chill tendency.

As a conclusion, it can be said that the TElow is inversely proportional to chill tendency, which means that keeping high values of lower eutectic temperature will prevent the chill formation.

As a result of controlling the TElow temperature with ATAS MetStar (instead of chill depth inspection), there is several benefits:

– By this TElow control, at the same time, you are controlling the inoculation status of your melt

– With ATAS test, the results can be quantified sharply rather than leaving it to the subjective representation of the chill test by the operator

– Getting TElow reading allows ATAS MetStar to be proactive with suggestion for amount of inoculation addition needed to keep TElow high (chill free) in the molds.